Before visiting Belize, I had never seen the jungle. After spending a few days on the ocean, we headed back into the mountainous interior near the capital. Our lodge was at the foot of one of these mountains, and from the top we had an amazing view of the valley below. Simply put, I was awed. 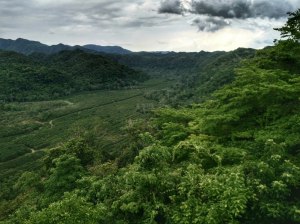 The canopy was thick with tall, beautiful trees. We went on a bird walk during the morning, and using a spotting scope and binoculars we saw a wealth of unbelievable bird species. Red-lored Parrots, Masked Tityra, Passerini’s Tanager, Keel-billed Toucans, Scarlet Macaws, and so many more flitted from tree to tree, or soared past. Birding in the tropics was unlike anything I had ever experienced; thank goodness we were with our guide Abel. He has been birding in the area for over a decade, and he was able to expertly pick out species by their songs, then instantly train the spotting scope for amazing views. In just one day I wracked up over 20 life birds.

About an hour from our lodge we saw not one but two ancient Mayan sites, which were also breathtaking. The giant stone structures stretched upwards into the sky, and I had to huff and puff a little to get to the top in the midday summer heat. From our vantage point, we could see all the way into Guatemala (can I check off a country if I’ve seen it but not set foot in it?). Visiting the ruins brought new wildlife sightings as well: Blue-crowned Motmots called from forest perches, and Howler Monkeys chased each other in a tree just above us. 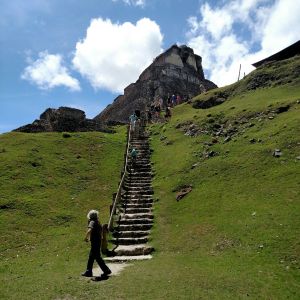 Belize was completely amazing. The people were friendly, the scenery spectacular, and the wildlife incredible. Sign me up for a return trip!